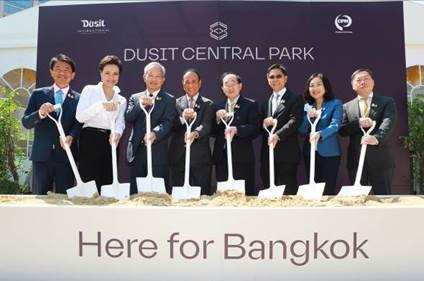 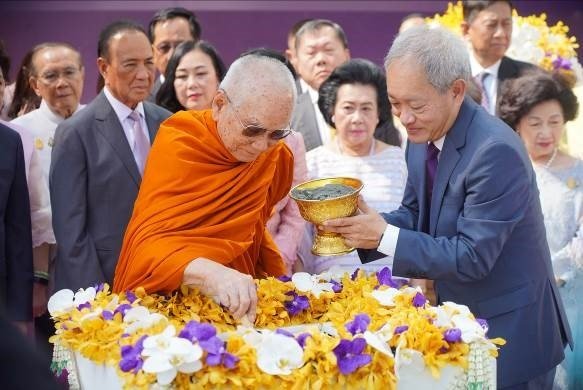 His Holiness Somdet Phra Ariyawongsagatayarn, the Supreme Patriarch of Thailand, graciously presided over the ceremony where he anointed the foundation stone, sprinkled lustral water and scattered blessed sand, symbolic gestures believed to impart prosperity and good fortune. The ceremony marked the auspicious beginning of construction work for the property project, thanks to the utmost generosity of His Holiness the Supreme Patriarch.

On hand to welcome His Holiness the Supreme Patriarch and also to witness the proceedings were Arsa Sarasin, Chairman of Board of Director and Independent Director at DTC; and Chanin Donavanik, Vice Chairman and Chairman of the Executive Committee at DTC; together with the Project’s top executives including Suphajee Suthumpun, Group Chief Executive at DTC; Narongchai Wongthanavimok, Group Chief Finance at DTC and CEO at Vimarn Suriya Co., Ltd; Suthichai Chirathivat, Chairman at Central Group of Companies and Chairman at CPN; Preecha Ekkunagul, President and Chief Executive Officer at CPN; Wallaya Chirathivat, Deputy Chief Executive Officer at CPN; and Suthipak Chirathivat, Senior Executive Vice President, Office of the President at CPN.

Following the auspicious foundation stone laying ceremony was a groundbreaking ceremony which was presided over by Arsa Sarasin and also joined by the project’s top executives.

Developed in partnership with Central Pattana (CPN), under the concept “Here for Bangkok”, Dusit Central Park is the most outstanding mixed-use project on Rama IV Road. It is comprised of luxury residences spanning 69 floors with 389 units, each with a view of Lumpini Park, and a gross area of 117, 500 sqm.; a state-of-the-art 45-story office tower with a total floor area of 92,000 sqm bringing job creation and income generation to members of the local community; the 6-story Central Park shopping mall with a gross usable area of 78, 000 sqm. complete with a 7-rai roof park, Thailand’s biggest, spread over 11,000 sqm.; and Dusit Thani Hotel spanning 39 floors with a gross area of 49,000 sqm. that comes alive in a more modern design. The guest rooms come in greater width and comfort. “Here for Bangkok” represents Dusit Thani’s commitment to elevating Thai hospitality to international standards and putting Bangkok on the world map as a world-class destination for tourism, hospitality and business. 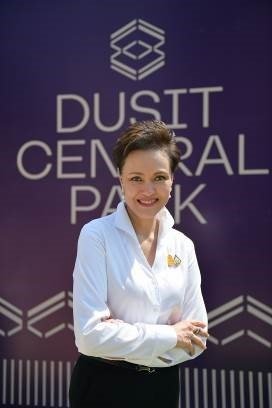 Ms. Suphajee Suthumpun, Group Chief Executive at Dusit Thani Public Company Limited, says, “Today is a historic occasion because the Dusit Central Park project has been honoured with the presence of the Supreme Patriarch to preside over the foundation stone-laying ceremony. Today also marks Dusit Thani Group’s first step towards a whole new era, joining forces with experienced partners like Central Pattana. Together we’re making a commitment to developing this tract of land and building on the legacy of the legendary Dusit Thani in a bid to bring Thai hospitality up to international standards. We’ve successfully made it over the past 50 years.”

Ms. Wallaya Chirathivat, Deputy CEO of Central Pattana Public Company Limited (CPN), comments, “Dusit Central Park project is not just another mixed-use development but a new creation that will transform this area into the prime core of the CBD (“Super Core CBD”). The project connects all important infrastructure and transportation and embraces a green concept as the project is just opposite Lumpini Park. It also delivers enduring value for all our stakeholders. One of the highlights is our 7-rai rooftop park which will create the one-and-only lush experience for our community.” 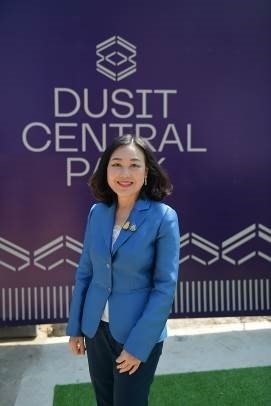 Envisioned as a new city landmark, Dusit Central Park is designed to transform this area of Bangkok into the prime core of the CBD, and ultimately setting the standard for mixed-use projects in Bangkok. The project aims to create new opportunities by delivering new lifestyle and business experiences and brings greater convenience to commuters using the public transport system by linking directly with the Bangkok BTS (Skytrain) systems and MRT (Mass Rapid Transit underground) at Sala Daeng and Silom stations, respectively.

As the vanguard of Thailand’s architectural heritage, Dusit Central Park excels in both form and function with its architectural design steeped in technical innovation. Its design is the result of advanced wind tunnel testing that has been conducted to ensure that the structure will be safe in high winds and resistant to natural disasters.

Set over 23 rais in a prime location opposite Lumpini Park, the Bt36 billion project will seamlessly connect four areas of Bangkok to create a new junction where old meets new, and financial meets commercial. The project is due for completion in 2023.

When you visit our website, it may store or retrieve information on your browser, mostly in the form of cookies. This information might be about you, your preferences or your device and is mostly used to make the site work as you expect it to. The information does not usually directly identify you, but it can give you a more personalized web experience. Because we respect your right to privacy, you can choose not to allow some types of cookies. Click on the different category headings to find out more and change our default settings. However, blocking some types of cookies may impact your experience of the site and the services we are able to offer. More Information
Accept All

Always Active
These cookies are necessary for the website to function and cannot be switched off in our systems. They are usually only set in response to actions made by you which amount to a request for services, such as setting your privacy preferences, logging in or filling in forms. You can set your browser to block or alert you about these cookies, but some parts of the site will not then work. These cookies do not store any personally identifiable information.

These cookies allow us to count visits and traffic sources, so we can measure and improve the performance of our site. They help us know which pages are the most and least popular and see how visitors move around the site. All information these cookies collect is aggregated and therefore anonymous. If you do not allow these cookies, we will not know when you have visited our site.
Confirm My Choices